After the bleak post on Royal Ballet, an uplifting one!

Some time ago I was giving some (just common-sense) thought to the differences between Theatre and Dance, so I was deeply interested when I found today this comment made by Aidan Ryan, a blogger who describes himself as “writer, traveller, duellist and scapegrace”. Aidan went to a performance of A Streetcar Named Desire (I already mentioned Scottish Ballet’s version when I quoted Tennessee Williams). The last ballet he had seen, as far as he could remember, was a Nutcracker some 15 years before – so we can firmly place him as non-expert, “wider” audience.

Aidan is a writer, and as you would expect, he missed the words!, since Tennessee William’s writing is not just any writing, it is the work of a master – and he was sure everyone else was missing them too.

… the title of his post is “A Triumph on Calculated Loss.” Quoting:

“Even audiences just as accustomed to dance as to drama found themselves aching for a human voice through most this production, but this feeling was only a footnote to our encompassing awe at director Nancy Meckler’s and choreographer Annabelle Lopez Ochoa’s gamble, really a calculated loss, to sacrifice the author’s words to more freely interpret his spirit.“

“If the Scottish Ballet proved anything this past week, it was that the form lends itself brilliantly to this sort of drama.  Blanche (played by principal dancer Eve Musto) here becomes a multiplicity: she is not one dancer onstage but a whole company – ghosts, half-ghosts, a score of black-dressed dancers with roses for mouths – and we watch as she calls on other bodies, parts of herself, to manifest the internal reality she battles, always under the 28 bare bulbs that hang above the stage. “ 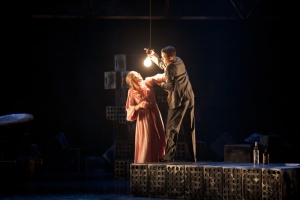 “Sometimes watching drama adapted into dance is like watching a couple fight through the window looking into their apartment.  The show is mute, we feel our distance more acutely and inescapably than in traditional drama – but we cannot look away.

Other times – many times, during Streetcar – the choreography is so natural, so expressive hate and frailty and wild unstill spectrums of sexuality that we think it must have been improvised, the dancers possessed in some enthusiasmos and ecstasis, channeling the old gods’ emotions which human feeling is based upon.”

“The brute Stanley and the battered Blanche shed the layers of complexity that made Tennessee Williams’ one of the twentieth century’s greatest playwrights – though having done so, I suppose, they danced more freely, emoted more purely and therefore on a grander scale.”

“Meckler and Ochoa turned away from the nuance of naturalist theatre and reached instead for the power of archetypal feeling, operatic emotion.  And they succeeded.  This was never more evident than in the ballet’s climax, which took the implied rape in Williams’ script and made it brilliantly, brutally explicit, in choreography that left eyelids inoperable and mouths agape.  (“Nothing like a little bit of rape on a Saturday afternoon,” the Scottish woman beside me said to her friend after the final curtain had fallen.  It was a comment still half-nervous, possible only after the calming interlude of clapping.  We were all still in awe.) Peter Salem’s score was so powerful here that it seemed to become a physical part of the set, with a sound like pulsing pain or a beating cut vein amplified in the cavern of the head.”

I was lucky to find Ryan’s description.  It is a spontaneous, real example of this blog’s most important point:  Dance can reach, can enrapt, can create magic for anyone, no need to be an “initiate” – provided it has Form and Content, provided it is able to suspend disbelief, provided it reaches decisively into what makes us human.

Dance is not better, worse or even complementary to Theatre – it is different! Like Music, it can bring you another kind of experience, grounded on more deep-seated, atavic roots. If things are made the right way, the kind of experience you cannot forget. If “things” are not just technique and form.

… and one more live performance on my wish list (sigh)!